skip to main | skip to sidebar

SHFAP presents Pink Moon, a group exhibition inspired by the final album of the English folksinger Nick Drake (1948-1974.) The exhibition includes paintings by Gideon Bok, Duncan Hannah, Kurt Knobelsdorf, Sangram Majumdar, Keith Morris, Stephanie Pierce and Stuart Shils, sculpture by Paul Villinski, music by D.M. Stith and Arborea and film by Chris Wilcha. The exhibition will also include Michael Trevithick’s original painting used for the album design of Pink Moon. The exhibition is accompanied by a pdf/catalog with an essay by Richard Peabody about Nick Drake’s Pink Moon album.

Pink Moon, Nick Drake’s final bare bones masterpiece of voice and guitar was released in 1972, two years before his premature death from an overdose of antidepressants. Often considered to reflect the young singer’s increasingly fragile mental state, it is a pop masterpiece, blending exquisite open guitar tunings with Drakes ethereal singing and abstract word pictures. Pink Moon is an album that speaks volumes to artists.

This exhibition was realized with the cooperation of The Estate of Nick Drake, who have encouraged the possibility of contemporary artists having an ongoing dialog with Drake’s work. The Estate lent Michael Trevithick’s original surrealist inspired painting for the Pink Moon album to the exhibition, allowing us the opportunity to see the original art for a seventies album design icon.

Among the contemporary works in the exhibition, Gideon Bok’s perceptually based painting "From the Morning" depicts his studio in Maine with motorcycles, musical instruments and record player . Multiple images of a copy of the Pink Moon lp cascade across the studio floor.

In The Summer of Love, Duncan Hannah portrays an upper class English idyll with a white shirted couple holding hands strolling by a lake by a castle.

Pink Moon, the exhibition, explores hidden dimensions of connectivity in between music and art, and while doing so seeks to reconsider the resonance of a pop masterwork in contemporary terms.

Posted by gideon at 6:58 AM No comments: 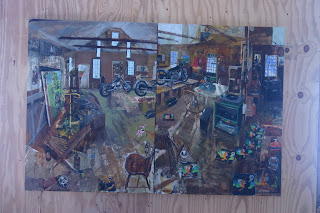 Posted by gideon at 5:10 PM No comments: 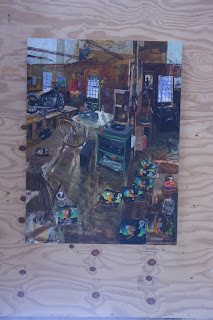 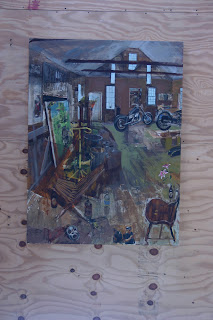 Posted by gideon at 5:08 PM No comments:

Labels: These are about 50"x35" each
Newer Posts Older Posts Home
Subscribe to: Posts (Atom)